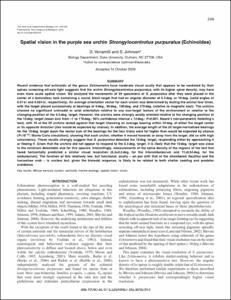 View / Download
1.0 Mb
Date
Authors
Yerramilli, D
Johnsen, S
Repository Usage Stats
215
views
201
downloads
Abstract
Recent evidence that echinoids of the genus Echinometra have moderate visual acuity that appears to be mediated by their spines screening off-axis light suggests that the urchin Strongylocentrotus purpuratus, with its higher spine density, may have even more acute spatial vision. We analyzed the movements of 39 specimens of S. purpuratus after they were placed in the center of a featureless tank containing a round, black target that had an angular diameter of 6.5 deg. or 10 deg. (solid angles of 0.01 sr and 0.024 sr, respectively). An average orientation vector for each urchin was determined by testing the animal four times, with the target placed successively at bearings of 0 deg., 90 deg., 180 deg. and 270 deg. (relative to magnetic east). The urchins showed no significant unimodal or axial orientation relative to any non-target feature of the environment or relative to the changing position of the 6.5 deg. target. However, the urchins were strongly axially oriented relative to the changing position of the 10 deg. target (mean axis from -1 to 179 deg.; 95% confidence interval +/- 12 deg.; P<0.001, Moore's non-parametric Hotelling's test), with 10 of the 20 urchins tested against that target choosing an average bearing within 10 deg. of either the target center or its opposite direction (two would be expected by chance). In addition, the average length of the 20 target-normalized bearings for the 10 deg. target (each the vector sum of the bearings for the four trials) were far higher than would be expected by chance (P<10(-10); Monte Carlo simulation), showing that each urchin, whether it moved towards or away from the target, did so with high consistency. These results strongly suggest that S. purpuratus detected the 10 deg. target, responding either by approaching it or fleeing it. Given that the urchins did not appear to respond to the 6.5 deg. target, it is likely that the 10 deg. target was close to the minimum detectable size for this species. Interestingly, measurements of the spine density of the regions of the test that faced horizontally predicted a similar visual resolution (8.3+/-0.5 deg. for the interambulacrum and 11+/-0.54 deg. for the ambulacrum). The function of this relatively low, but functional, acuity - on par with that of the chambered Nautilus and the horseshoe crab - is unclear but, given the bimodal response, is likely to be related to both shelter seeking and predator avoidance.
Type
Journal article
Subject
Animals
Behavior, Animal
Form Perception
Motor Activity
Orientation
Strongylocentrotus purpuratus
Vision, Ocular
Permalink
https://hdl.handle.net/10161/4192
Published Version (Please cite this version)
10.1242/jeb.033159
Publication Info
Yerramilli, D; & Johnsen, S (2010). Spatial vision in the purple sea urchin Strongylocentrotus purpuratus (Echinoidea). J Exp Biol, 213(2). pp. 249-255. 10.1242/jeb.033159. Retrieved from https://hdl.handle.net/10161/4192.
This is constructed from limited available data and may be imprecise. To cite this article, please review & use the official citation provided by the journal.
Collections
More Info
Show full item record