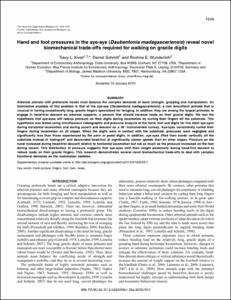 View / Download
497.1 Kb
Date
Authors
Kivell, Tracy L
Schmitt, Daniel
Wunderlich, Roshna E
Repository Usage Stats
396
views
404
downloads
Abstract
Arboreal animals with prehensile hands must balance the complex demands of bone strength, grasping and manipulation. An informative example of this problem is that of the aye-aye (Daubentonia madagascariensis), a rare lemuriform primate that is unusual in having exceptionally long, gracile fingers specialized for foraging. In addition, they are among the largest primates to engage in head-first descent on arboreal supports, a posture that should increase loads on their gracile digits. We test the hypothesis that aye-ayes will reduce pressure on their digits during locomotion by curling their fingers off the substrate. This hypothesis was tested using simultaneous videographic and pressure analysis of the hand, foot and digits for five adult aye-ayes during horizontal locomotion and during ascent and descent on a 30 degrees instrumented runway. Aye-ayes consistently curled their fingers during locomotion on all slopes. When the digits were in contact with the substrate, pressures were negligible and significantly less than those experienced by the palm or pedal digits. In addition, aye-ayes lifted their hands vertically off the substrate instead of 'toeing-off' and descended head-first at significantly slower speeds than on other slopes. Pressure on the hand increased during head-first descent relative to horizontal locomotion but not as much as the pressure increased on the foot during ascent. This distribution of pressure suggests that aye-ayes shift their weight posteriorly during head-first descent to reduce loads on their gracile fingers. This research demonstrates several novel biomechanical trade-offs to deal with complex functional demands on the mammalian skeleton.
Type
Journal article
Subject
Animals
Biomechanical Phenomena
Foot
Hand
Posture
Strepsirhini
Walking
Permalink
https://hdl.handle.net/10161/4193
Published Version (Please cite this version)
10.1242/jeb.040014
Publication Info
Kivell, Tracy L; Schmitt, Daniel; & Wunderlich, Roshna E (2010). Hand and foot pressures in the aye-aye (Daubentonia madagascariensis) reveal novel biomechanical trade-offs required for walking on gracile digits. J Exp Biol, 213(Pt 9). pp. 1549-1557. 10.1242/jeb.040014. Retrieved from https://hdl.handle.net/10161/4193.
This is constructed from limited available data and may be imprecise. To cite this article, please review & use the official citation provided by the journal.
Collections
More Info
Show full item record Professor in the Department of Evolutionary Anthropology
My primary interest is in the evolution of primate locomotion. I am studying the mechanics of movement in primates and other vertebrates in the laboratory to understand the relationship between movement and postcranial morphology, and the unique nature of primates among mammals. Current projects include the origins of primate locomotion and the evolution of vertebrate bipedalism.