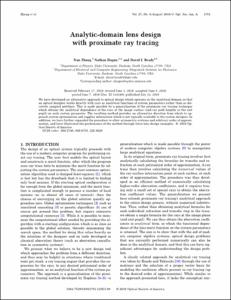 View / Download
213.6 Kb
Date
Authors
Zheng, Nan
Hagen, Nathan
Brady, David J
Repository Usage Stats
208
views
231
downloads
Abstract
We have developed an alternative approach to optical design which operates in the analytical domain so that an optical designer works directly with rays as analytical functions of system parameters rather than as discretely sampled polylines. This is made possible by a generalization of the proximate ray tracing technique which obtains the analytical dependence of the rays at the image surface (and ray path lengths at the exit pupil) on each system parameter. The resulting method provides an alternative direction from which to approach system optimization and supplies information which is not typically available to the system designer. In addition, we have further expanded the procedure to allow asymmetric systems and arbitrary order of approximation, and have illustrated the performance of the method through three lens design examples.
Type
Journal article
Permalink
https://hdl.handle.net/10161/4236
Collections
More Info
Show full item record