Organic nitrogen in PM2.5 aerosol at a forest site in the Southeast US 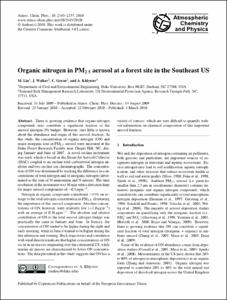 View / Download
6.3 Mb
Date
Authors
Lin, M
Walker, J
Geron, C
Khlystov, A
Repository Usage Stats
273
views
363
downloads
Abstract
There is growing evidence that organo-nitrogen compounds may constitute a significant fraction of the aerosol nitrogen (N) budget. However, very little is known about the abundance and origin of this aerosol fraction. In this study, the concentration of organic nitrogen (ON) and major inorganic ions in PM2.5 aerosol were measured at the Duke Forest Research Facility near Chapel Hill, NC, during January and June of 2007. A novel on-line instrument was used, which is based on the Steam Jet Aerosol Collector (SJAC) coupled to an on-line total carbon/total nitrogen analyzer and two on-line ion chromatographs. The concentration of ON was determined by tracking the difference in concentrations of total nitrogen and of inorganic nitrogen (determined as the sum of N-ammonium and N-nitrate). The time resolution of the instrument was 30 min with a detection limit for major aerosol components of ∼0.1 mu;gm-3. Nitrogen in organic compounds contributed ∼33% on average to the total nitrogen concentration in PM2.5, illustrating the importance of this aerosol component. Absolute concentrations of ON, however, were relatively low (lt;1.0 mu;gm-3) with an average of 0.16 mu;gm-3. The absolute and relative contribution of ON to the total aerosol nitrogen budget was practically the same in January and June. In January, the concentration of ON tended to be higher during the night and early morning, while in June it tended to be higher during the late afternoon and evening. Back-trajectories and correlation with wind direction indicate that higher concentrations of ON occur in air masses originating over the continental US, while marine air masses are characterized by lower ON concentrations. The data presented in this study suggests that ON has a variety of sources, which are very difficult to quantify without information on chemical composition of this important aerosol fraction.
Type
Journal article
Permalink
https://hdl.handle.net/10161/4251
Collections
More Info
Show full item record