On Population Structure and Marriage Dynamics 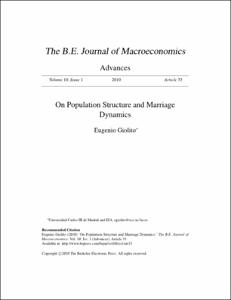 View / Download
2.1 Mb
Date
Author
Giolito, Eugenio
Repository Usage Stats
320
views
431
downloads
Abstract
I develop an equilibrium, a two-sided search model of marriage with endogenous population growth, to study the interaction between fertility, the age structure of the population and the age of men and women at first marriage. Within a simple two-period overlapping generation model, I show that given an increase of the desired number of children age at marriage is affected through two different channels. First, as population growth increases, the age structure of the population produces a thicker market for young people, inducing early marriages. The second channel comes from differential fecundity: if the desired number of children is not feasible for older women, women tend to marry younger and men older, with single men outnumbering single women in equilibrium. Using an extended version of the model to a finite number of periods and fertility data, I show that two mechanisms described above may have acted as persistence mechanisms after the U. S. Baby Boom. Specifically, I find that the demographic transitional dynamics after the Baby Boom may account for approximately 23 percent of the increase in men's age of marriage between 1985 and 2009, although the impact on women's age is small.
Type
Other article
Subject
baby boom
marriage
population structure
search
model
divorce
economics
Permalink
https://hdl.handle.net/10161/4254
Citation
Giolito,Eugenio. 2010. On Population Structure and Marriage Dynamics. B E Journal of Macroeconomics 10(1): 33-33.
Collections
More Info
Show full item record