Control and Optimization of Track Coverage in Underwater Sensor Networks 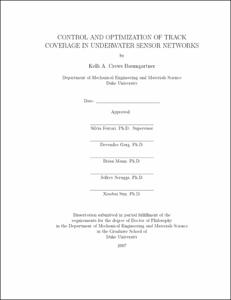 View / Download
20.2 Mb
Date
Author
Baumgartner, Kelli A. Crews
Advisor
Ferrari, Silvia
Repository Usage Stats
432
views
693
downloads
Abstract
Sensor network coverage refers to the quality of service provided by a sensor network surveilling a region of interest. So far, coverage problems have been formulated to address area coverage or to maintain line-of-sight visibility in the presence of obstacles (i.e., art-gallery problems). Although very useful in many sensor applications, none of the existing formulations address coverage as it pertains to target tracking by means of multiple sensors, nor do they provide a closed-form function that can be applied to the problem of allocating sensors for the surveilling objective of maximizing target detection while minimizing false alarms. This dissertation presents a new coverage formulation addressing the quality of service of sensor networks that cooperatively detect targets traversing a region of interest, and is readily applicable to the current sensor network coverage formulations. The problem of track coverage consists of finding the positions of n sensors such that the amount of tracks detected by at least k sensors is optimized. This dissertation studies the geometric properties of the network, addressing a deterministic track-coverage formulation and binary sensor models. It is shown that the tracks detected by a network of heterogeneous omnidirectional sensors are the geometric transversals of non-translates families of disks. A novel methodology based on cones and convex analysis is presented for representing and measuring sets of transversals as closed-form functions of the sensors positions and ranges. As a result, the problem of optimally deploying a sensor network with the aforementioned objectives can be formulated as an optimization problem subject to mission dynamics and constraints. The sensor placement problem, in which the sensors are placed such that track coverage is maximized for a fixed sensor network, is formulated as a nonlinear program and solved using sequential quadratic programming. The sensor deployment, involving a dynamic sensor network installed on non-maneuverable sonobuoys deployed in the ocean, is formulated as an optimization problem subject to inverse dynamics. Both a finite measure of the cumulative coverage provided by a sensor network over a fixed period of time and the oceanic-induced current velocity field are accounted for in order to optimize the dynamic sensor network configuration. It is shown that a state-space representation of the motions of the individual sensors subject to the current vector field can be derived from sonobuoys oceanic drift models and obtained from CODAR measurements. Also considered in the sensor model are the position-dependent acoustic ranges of the sensors due to the effects from heterogenous environmental conditions, such as ocean bathymetry, surface temporal variability, and bottom properties. A solution is presented for the initial deployment scheme of the non-maneuverable sonobuoys subject to the ocean's current, such that sufficient track coverage is maintained over the entire mission. As sensor networks are subject to random disturbances due to unforseen heterogenous environmental conditions propagated throughout the sensors trajectories, the optimal initial positions solution is evaluated for robustness through Monte Carlo simulations. Finally, the problem of controlling a network of maneuverable underwater vehicles, each equipped with an onboard acoustic sensor is formulated using optimal control theory. Consequently, a new optimal control problem is presented that integrates sensor objectives, such as track coverage, with cooperative path planning of a mobile sensor network subject to time-varying environmental dynamics.
Type
Dissertation
Department
Mechanical Engineering and Materials Science
Subject
Engineering, Mechanical
Coverage
sensor networks
nonlinear programming
geometric transversals
optimal control
nonlinear modeling
Permalink
https://hdl.handle.net/10161/426
Citation
Baumgartner, Kelli A. Crews (2007). Control and Optimization of Track Coverage in Underwater Sensor Networks. Dissertation, Duke University. Retrieved from https://hdl.handle.net/10161/426.
Collections
More Info
Show full item record