Who Will Serve? Education, Labor Markets, and Military Personnel Policy 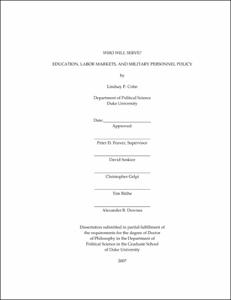 View / Download
2.1 Mb
Date
Author
Cohn, Lindsay P.
Advisor
Feaver, Peter D
Repository Usage Stats
436
views
4,957
downloads
Abstract
Contemporary militaries depend on volunteer soldiers capable of dealing with advanced technology and complex missions. An important factor in the successful recruiting, retention, and employment of quality personnel is the set of personnel policies which a military has in place. It might be assumed that military policies on personnel derive solely from the functional necessities of the organization's mission, given that the stakes of military effectiveness are generally very high. Unless the survival of the state is in jeopardy, however, it will seek to limit defense costs, which may entail cutting into effectiveness. How a state chooses to make the tradeoffs between effectiveness and economy will be subject to influences other than military necessity. In this study, I argue that military personnel management policies ought to be a function of the interaction between the internal pressures of military mission and the external pressures of the national economic infrastructure surrounding the military. The pressures of military mission should not vary significantly across advanced democratic states, but the national market economic type will. Using written policy and expert interview data from five countries, this study analyzes how military selection, accessions, occupational specialty assignment, and separations policies are related to the country's educational and training system, the significance of skills certification on the labor market, and labor flexibility. I evaluate both officers and enlisted personnel, and I compare them across countries and within countries over time. I find that market economic type is a significant explanatory variable for the key military personnel policies under consideration, although other factors such as the size of the military and the stakes of military effectiveness probably also influence the results. Several other potential explanatory factors such as the ease of recruiting appear to be subordinate to market economic type in predicting policy.
Type
Dissertation
Department
Political Science
Subject
Political Science, International Law and Relations
Military Studies
military personnel
military recruiting
education and training
labor markets
Permalink
https://hdl.handle.net/10161/429
Citation
Cohn, Lindsay P. (2007). Who Will Serve? Education, Labor Markets, and Military Personnel Policy. Dissertation, Duke University. Retrieved from https://hdl.handle.net/10161/429.
Collections
More Info
Show full item record