Heading Down the Wrong Pathway: on the Influence of Correlation within Gene Sets 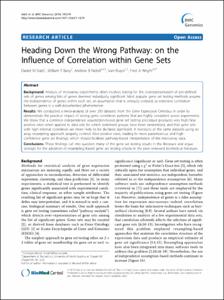