Why do nominal characteristics acquire status value? A minimal explanation for status construction. 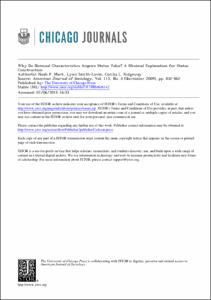 View / Download
209.3 Kb
Date
Authors
Mark, Noah P
Smith-Lovin, Lynn
Ridgeway, Cecilia L
Repository Usage Stats
371
views
483
downloads
Abstract
Why do beliefs that attach different amounts of status to different categories of people become consensually held by the members of a society? We show that two microlevel mechanisms, in combination, imply a system-level tendency toward consensual status beliefs about a nominal characteristic. (1) Status belief diffusion: a person who has no status belief about a characteristic can acquire a status belief about that characteristic from interacting with one or more people who have that status belief. (2) Status belief loss: a person who has a status belief about a characteristic can lose that belief from interacting with one or more people who have the opposite status belief. These mechanisms imply that opposite status beliefs will tend to be lost at equal rates and will tend to be acquired at rates proportional to their prevalence. Therefore, if a status belief ever becomes more prevalent than its opposite, it will increase in prevalence until every person holds it.
Type
Journal article
Subject
Culture
Hierarchy, Social
Humans
Models, Theoretical
Social Identification
Social Perception
Social Values
Socioeconomic Factors
Permalink
https://hdl.handle.net/10161/4360
Collections
More Info
Show full item record Robert L. Wilson Professor Distinguished of Sociology in Trinity College of Arts and Sciences
I study emotion, identity, and action. I’m interested in the basic question of how identities affect social interaction. I use experimental, observational, survey and simulation methods to describe how identities, actions and emotions are interrelated. The experiments I do usually involve creating social situations where unusual things happen to people, then seeing how they respond behaviorally or emotionally. I observe small task group interactions to see how identities influence conversat