Corruption and the Counterrevolution: the Rise and Fall of the Black Hundred 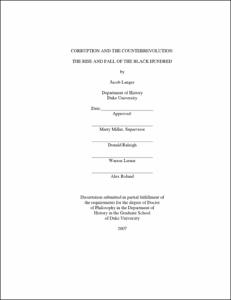 View / Download
1.1 Mb
Date
Author
Langer, Jacob
Advisor
Miller, Marty
Repository Usage Stats
518
views
9,129
downloads
Abstract
This dissertation analyzes the ideology and activities of the Black Hundred movement at the end of the Imperial period in Russia (1905-1917). It seeks to explain the reasons for the sudden, rapid expansion of Black Hundred organizations in 1905, as well as the causes of their decline, which began just two years after their appearance. It further attempts to elucidate the complex relationship between the Black Hundred and Russian authorities, including the central government and local officials. The problem is approached by offering two distinct perspectives on the Black Hundred. First, a broad overview of the movement is presented. The focus here is on the headquarter branches of Black Hundred organizations in St. Petersburg, but these chapters also look at the activities of many different provincial branches, relating trends in the provinces to events in the center in order to draw conclusions about the nature of the overall movement. Second, this dissertation offers an extended case study of the Black Hundred in the city of Odessa, where a particularly large and violent Black Hundred movement emerged in 1906. It explores the factors that made Odessa conducive to the Black Hundred, and explains events in Odessa as symptomatic of the overall condition of Black Hundred groups. The research is based primarily on material from archives in Moscow and Odessa comprising police reports and resolutions approved at national monarchist congresses. It also draws on memoirs, newspaper accounts from the liberal, leftist, and Black Hundred press, and the secondary literature. The framework primarily consists of analyzing the membership, leadership, ideology, funding, and activities of the Black Hundred organizations that served as the main expression of the monarchist movement. This dissertation concludes that the decline of the Black Hundred cannot be attributed to the harmful actions of government officials, as historians have previously argued. Instead, the movement lost public confidence and fell victim to bitter infighting owing to the corruption of Black Hundred leaders, both in the center and in the provinces. Because Black Hundred organizations enjoyed the backing of many state officials and the outspoken support of the tsar, they were often perceived as officially-sponsored parties. This attracted many unscrupulous members who hoped to use their links to the Black Hundred to cultivate official connections or to identify money-making opportunities. These members, often rising to leadership positions, proved particularly prone to corruption, a habit that ruined the organizations' finances, sparked bitter internecine rivalries, and ultimately discredited the entire movement.
Type
Dissertation
Department
History
Subject
History, Russian and Soviet
History, Russian and Soviet
monarchists
far
right
Imperial Russia
Odessa
Permalink
https://hdl.handle.net/10161/438
Citation
Langer, Jacob (2007). Corruption and the Counterrevolution: the Rise and Fall of the Black Hundred. Dissertation, Duke University. Retrieved from https://hdl.handle.net/10161/438.
Collections
More Info
Show full item record