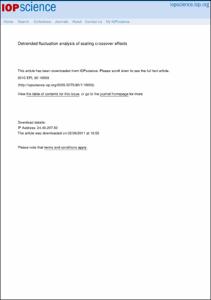 View / Download
216.5 Kb
Date
Authors
Ignaccolo, M
Latka, M
West, BJ
Repository Usage Stats
435
views
470
downloads
Abstract
Detrended fluctuation analysis (DFA) is one of the most frequently used fractal time series algorithms. DFA has also become the tool of choice for analysis of the short-time fluctuations despite the fact that its validity in this domain has never been demonstrated. We adopt an Ornstein-Uhlenbeck Langevin equation to generate a time series which exhibits short-time power-law scaling and incorporates the fundamental property of physiological control systems-negative feedback. To determine the scaling exponent, we derive the analytical expressions for the standard deviation of the solution X(t) of this equation using both the ensemble of statistically independent trajectories and the ensemble obtained by partitioning a single trajectory. The latter approach is used in DFA and many other physiological applications. Surprisingly, the formulas for the standard deviations are different for these two ensembles. We demonstrate that the partitioning amounts to building up deterministic trends that satisfy the "trend + signal" decomposition assumption which is characteristic of DFA. Consequently, the dependence of the rms of DFA residuals F(tau) on the length tau of data window is the same for both ensembles. The growth of F(tau) is significantly different from that of the standard deviation of X(t). While the DFA estimate of the short-time scaling exponent is correct, the polynomial detrending delays the approach of F(tau) to the asymptotic value by as much as an order of magnitude. This delay may underlie the gradual change of the DFA scaling index typically observed in time series that exhibit crossover between the short- and long-time scaling. Copyright (C) EPLA, 2010
Type
Other article
Subject
heart-rate dynamics
time-series
physics, multidisciplinary
Permalink
https://hdl.handle.net/10161/4406
Published Version (Please cite this version)
10.1209/0295-5075/90/10009
Citation
Ignaccolo,M.;Latka,M.;West,B. J.. 2010. Detrended fluctuation analysis of scaling crossover effects. Epl 90(1): 10009-10009.
Collections
More Info
Show full item record