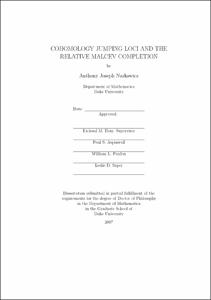 View / Download
573.4 Kb
Date
Author
Narkawicz, Anthony Joseph
Advisor
Hain, Richard M
Repository Usage Stats
417
views
537
downloads
Abstract
Two standard invariants used to study the fundamental group of the complement X of a hyperplane arrangement are the Malcev completion of its fundamental group G and the cohomology groups of X with coefficients in rank one local systems. In this thesis, we develop a tool that unifies these two approaches. This tool is the Malcev completion S_p of G relative to a homomorphism p from G into (C^*)^N. The relative completion S_p is a prosolvable group that generalizes the classical Malcev completion; when p is the trivial representation, S_p is the Malcev completion of G. The group S_p is tightly controlled by the cohomology groups H^1(X,L_{p^k}) with coefficients in the irreducible local systems L_{p^k} associated to the representation p.The pronilpotent Lie algebra u_p of the prounipotent radical U_p of S_p has been described by Hain. If p is the trivial representation, then u_p is the holonomy Lie algebra, which is well-known to be quadratically presented. In contrast, we show that when X is the complement of the braid arrangement in complex two-space, there are infinitely many representations p from G into (C^*)^2 for which u_p is not quadratically presented.We show that if Y is a subtorus of the character torus T containing the trivial character, then S_p is combinatorially determined for general p in Y. We do not know whether S_p is always combinatorially determined. If S_p is combinatorially determined for all characters p of G, then the characteristic varieties of the arrangement X are combinatorially determined.When Y is an irreducible subvariety of T^N, we examine the behavior of S_p as p varies in Y. We define an affine group scheme S_Y over Y such that if Y = {p}, then S_Y is the relative Malcev completion S_p. For each p in Y, there is a canonical homomorphism of affine group schemes from S_p into the affine group scheme which is the restriction of S_Y to p. This is often an isomorphism. For example, if there exists p in Y whose image is Zariski dense in G_m^N, then this homomorphism is an isomorphism for general p in Y.
Type
Dissertation
Department
Mathematics
Subject
Mathematics
Malcev Completion
Hyperplane Arrangements
Characteristic Varieties
Orlik
Solomon Algebra
Rational Homotopy Theory
Iterated Integrals
Permalink
https://hdl.handle.net/10161/441
Citation
Narkawicz, Anthony Joseph (2007). Cohomology Jumping Loci and the Relative Malcev Completion. Dissertation, Duke University. Retrieved from https://hdl.handle.net/10161/441.
Collections
More Info
Show full item record