The Blind Heroine in Cinema History: Film and the Not-Visual 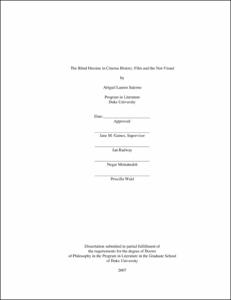 View / Download
4.7 Mb
Date
Author
Salerno, Abigail
Advisor
Gaines, Jane
Repository Usage Stats
487
views
5,637
downloads
Abstract
My dissertation explores non-visual experiences of film through a study of the recurring cinematic figure of the blind heroine in three periods of US cinema - late silent, classical, post-studio. My analysis of films, multi-sensory film "spectatorship" and film production critically depart from the readings offered by semiotic and psychoanalytic film theory, in favor of theories of cinematic perception and theories of genre, namely, melodrama and suspense. My approach reorients theories of film that have explained cinema as an exclusively visual culture towards a broader consideration of sensory perception and film experience.Attention to Helen Keller, as an author and a cinematic protagonist, and to the ability of the figure of the blind heroine to reorganize the structure of the films that address her frames my discussion of modern film form. Film has attempted to represent the spatial, tactile and aural experiences of gendered blind protagonists for sighted viewers - to visually produce non-visual experiences and to move beyond the limitations of its own technologies. In each of the technological periods I examine, film uses cinematography that addresses the body, sonic and visual attention to texture and movement, and narrative and affective structures of melodrama and suspense, to create the audience's aesthetic experience. My work explores the ways in which cinema has been multi-sensory, embodied, and "not-visual" - that is, visual but also more than visual - through critical evaluation of the dominant arguments of film theory, formal analysis of films, and historical accounts of film production.Keller's work and the films I examine offer a theory of the modern phenomenological subject - a subject whose senses are not, finally, located within the body of the individual but are shared with, and borrowed from, the world of human and cinematic bodies they encounter.
Type
Dissertation
Department
Literature
Subject
Cinema
Literature, Comparative
American Studies
Film Studies
phenomenology
melodrama
blindness
Helen Keller
Permalink
https://hdl.handle.net/10161/444
Citation
Salerno, Abigail (2007). The Blind Heroine in Cinema History: Film and the Not-Visual. Dissertation, Duke University. Retrieved from https://hdl.handle.net/10161/444.
Collections
More Info
Show full item record