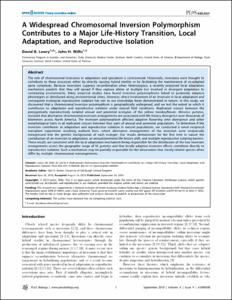 View / Download
2.5 Mb
Date
Authors
Lowry, David B
Willis, John H
Repository Usage Stats
439
views
399
downloads
Abstract
The role of chromosomal inversions in adaptation and speciation is controversial. Historically, inversions were thought to contribute to these processes either by directly causing hybrid sterility or by facilitating the maintenance of co-adapted gene complexes. Because inversions suppress recombination when heterozygous, a recently proposed local adaptation mechanism predicts that they will spread if they capture alleles at multiple loci involved in divergent adaptation to contrasting environments. Many empirical studies have found inversion polymorphisms linked to putatively adaptive phenotypes or distributed along environmental clines. However, direct involvement of an inversion in local adaptation and consequent ecological reproductive isolation has not to our knowledge been demonstrated in nature. In this study, we discovered that a chromosomal inversion polymorphism is geographically widespread, and we test the extent to which it contributes to adaptation and reproductive isolation under natural field conditions. Replicated crosses between the prezygotically reproductively isolated annual and perennial ecotypes of the yellow monkeyflower, Mimulus guttatus, revealed that alternative chromosomal inversion arrangements are associated with life-history divergence over thousands of kilometers across North America. The inversion polymorphism affected adaptive flowering time divergence and other morphological traits in all replicated crosses between four pairs of annual and perennial populations. To determine if the inversion contributes to adaptation and reproductive isolation in natural populations, we conducted a novel reciprocal transplant experiment involving outbred lines, where alternative arrangements of the inversion were reciprocally introgressed into the genetic backgrounds of each ecotype. Our results demonstrate for the first time in nature the contribution of an inversion to adaptation, an annual/perennial life-history shift, and multiple reproductive isolating barriers. These results are consistent with the local adaptation mechanism being responsible for the distribution of the two inversion arrangements across the geographic range of M. guttatus and that locally adaptive inversion effects contribute directly to reproductive isolation. Such a mechanism may be partially responsible for the observation that closely related species often differ by multiple chromosomal rearrangements.
Type
Journal article
Subject
Adaptation, Physiological
Alleles
Chromosome Inversion
Humans
Polymorphism, Genetic
Reproduction
Permalink
https://hdl.handle.net/10161/4449
Published Version (Please cite this version)
10.1371/journal.pbio.1000500
Publication Info
Lowry, David B; & Willis, John H (2010). A widespread chromosomal inversion polymorphism contributes to a major life-history transition, local adaptation, and reproductive isolation. PLoS Biol, 8(9). pp. e1000500. 10.1371/journal.pbio.1000500. Retrieved from https://hdl.handle.net/10161/4449.
This is constructed from limited available data and may be imprecise. To cite this article, please review & use the official citation provided by the journal.
Collections
More Info
Show full item record Professor of Biology
We conduct research on broad issues in evolutionary genetics, and we are currently addressing questions relating to the evolution of adaptation, reproductive isolation, breeding systems, inbreeding depression, and floral traits in natural plant populations. Please see our lab web page for more information.