Quantifying the effects of elastic collisions and non-covalent binding on glutamate receptor trafficking in the post-synaptic density. 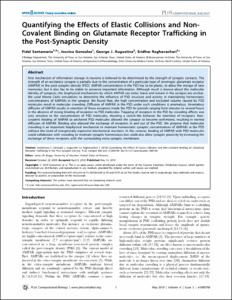 View / Download
867.7 Kb
Date
Authors
Santamaria, Fidel
Gonzalez, Jossina
Augustine, George J
Raghavachari, Sridhar
Repository Usage Stats
252
views
147
downloads
Abstract
One mechanism of information storage in neurons is believed to be determined by the strength of synaptic contacts. The strength of an excitatory synapse is partially due to the concentration of a particular type of ionotropic glutamate receptor (AMPAR) in the post-synaptic density (PSD). AMPAR concentration in the PSD has to be plastic, to allow the storage of new memories; but it also has to be stable to preserve important information. Although much is known about the molecular identity of synapses, the biophysical mechanisms by which AMPAR can enter, leave and remain in the synapse are unclear. We used Monte Carlo simulations to determine the influence of PSD structure and activity in maintaining homeostatic concentrations of AMPARs in the synapse. We found that, the high concentration and excluded volume caused by PSD molecules result in molecular crowding. Diffusion of AMPAR in the PSD under such conditions is anomalous. Anomalous diffusion of AMPAR results in retention of these receptors inside the PSD for periods ranging from minutes to several hours in the absence of strong binding of receptors to PSD molecules. Trapping of receptors in the PSD by crowding effects was very sensitive to the concentration of PSD molecules, showing a switch-like behavior for retention of receptors. Non-covalent binding of AMPAR to anchored PSD molecules allowed the synapse to become well-mixed, resulting in normal diffusion of AMPAR. Binding also allowed the exchange of receptors in and out of the PSD. We propose that molecular crowding is an important biophysical mechanism to maintain homeostatic synaptic concentrations of AMPARs in the PSD without the need of energetically expensive biochemical reactions. In this context, binding of AMPAR with PSD molecules could collaborate with crowding to maintain synaptic homeostasis but could also allow synaptic plasticity by increasing the exchange of these receptors with the surrounding extra-synaptic membrane.
Type
Journal article
Permalink
https://hdl.handle.net/10161/4451
Published Version (Please cite this version)
10.1371/journal.pcbi.1000780
Publication Info
Santamaria, Fidel; Gonzalez, Jossina; Augustine, George J; & Raghavachari, Sridhar (2010). Quantifying the effects of elastic collisions and non-covalent binding on glutamate receptor trafficking in the post-synaptic density. PLoS computational biology, 6(5). pp. e1000780. 10.1371/journal.pcbi.1000780. Retrieved from https://hdl.handle.net/10161/4451.
This is constructed from limited available data and may be imprecise. To cite this article, please review & use the official citation provided by the journal.
Collections
More Info
Show full item record

Adjunct Assistant Prof in the Department of Neurobiology