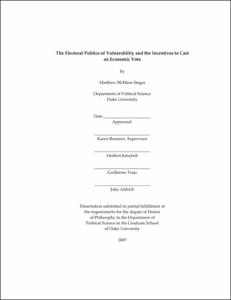 View / Download
2.4 Mb
Date
Author
Singer, Matthew McMinn
Advisor
Remmer, Karen
Repository Usage Stats
360
views
276
downloads
Abstract
The relationship between economic performance and support for the incumbent government varies across voters and electoral contexts. While some of this variation can be explained by factors that make it easier or harder to hold politicians accountable, an additional explanation is that the electoral importance of economic issues varies systematically across groups and contexts. Because issues that are personally important tend to be more easily accessible when voting, we prose that exposure to economic shocks generates higher incentives to place more weight on economic conditions when voting. We test this hypothesis using archived and original survey data from Argentina, Mexico, and Peru. The analysis demonstrates that economic vulnerability enhances the economy's salience. Specifically, poverty generates incentives to cast an egotropic vote while wealth, insecure employment, informal employment, and exclusion from governments welfare programs enhances sociotropic voting because these groups have greater stakes in the national economy. By implication, elections in developing countries with large numbers of vulnerable voters should be more strongly contested over economics despite the weak institutional environment that potentially undermines the ability of voters to hold politicians accountable. Aggregate elections returns and the CSES survey support this proposition and demonstrate that economic voting is substantially more common in Latin American than in Western Europe or North America. Thus variations in economic voting provide opportunities to not only learn about the conditions under which elections can serve as mechanisms of accountability but also a laboratory to model the process of preference formation and the demands voters place on their representatives.
Type
Dissertation
Department
Political Science
Subject
Political Science, General
Economic Voting
Presidential Approval
Latin America
Vulnerability
Salience
Informal Economy
Permalink
https://hdl.handle.net/10161/447
Citation
Singer, Matthew McMinn (2007). The Electoral Politics of Vulnerability and the Incentives to Cast an Economic Vote. Dissertation, Duke University. Retrieved from https://hdl.handle.net/10161/447.
Collections
More Info
Show full item record