Intergenic and genic sequence lengths have opposite relationships with respect to gene expression. 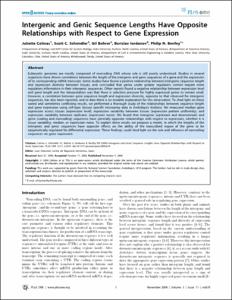 View / Download
917.1 Kb
Date
Authors
Colinas, Juliette
Schmidler, Scott C
Bohrer, Gil
Iordanov, Borislav
Benfey, Philip N
Repository Usage Stats
191
views
153
downloads
Abstract
Eukaryotic genomes are mostly composed of noncoding DNA whose role is still poorly understood. Studies in several organisms have shown correlations between the length of the intergenic and genic sequences of a gene and the expression of its corresponding mRNA transcript. Some studies have found a positive relationship between intergenic sequence length and expression diversity between tissues, and concluded that genes under greater regulatory control require more regulatory information in their intergenic sequences. Other reports found a negative relationship between expression level and gene length and the interpretation was that there is selection pressure for highly expressed genes to remain small. However, a correlation between gene sequence length and expression diversity, opposite to that observed for intergenic sequences, has also been reported, and to date there is no testable explanation for this observation. To shed light on these varied and sometimes conflicting results, we performed a thorough study of the relationships between sequence length and gene expression using cell-type (tissue) specific microarray data in Arabidopsis thaliana. We measured median gene expression across tissues (expression level), expression variability between tissues (expression pattern uniformity), and expression variability between replicates (expression noise). We found that intergenic (upstream and downstream) and genic (coding and noncoding) sequences have generally opposite relationships with respect to expression, whether it is tissue variability, median, or expression noise. To explain these results we propose a model, in which the lengths of the intergenic and genic sequences have opposite effects on the ability of the transcribed region of the gene to be epigenetically regulated for differential expression. These findings could shed light on the role and influence of noncoding sequences on gene expression.
Type
Journal article
Subject
Arabidopsis
DNA, Intergenic
Epigenesis, Genetic
Gene Expression Profiling
Gene Expression Regulation, Plant
Genetic Variation
Genome, Plant
RNA, Messenger
Permalink
https://hdl.handle.net/10161/4506
Published Version (Please cite this version)
10.1371/journal.pone.0003670
Publication Info
Colinas, Juliette; Schmidler, Scott C; Bohrer, Gil; Iordanov, Borislav; & Benfey, Philip N (2008). Intergenic and genic sequence lengths have opposite relationships with respect to gene expression. PLoS One, 3(11). pp. e3670. 10.1371/journal.pone.0003670. Retrieved from https://hdl.handle.net/10161/4506.
This is constructed from limited available data and may be imprecise. To cite this article, please review & use the official citation provided by the journal.
Collections
More Info
Show full item record