Segregating and Patterning Mesoderm from Endoderm: Emerging Roles for Hedgehog and FoxA 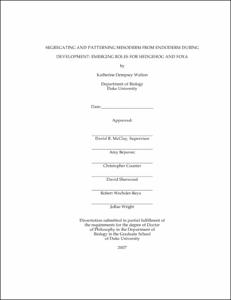 View / Download
25.1 Mb
Date
Author
Walton, Katherine Dempsey
Advisor
McClay, David R
Repository Usage Stats
393
views
206
downloads
Abstract
One of the fundamental questions in developmental biology is how cells communicate during embryonic development to pattern the animal with defined axes and correctly placed organs. There are several key signal transduction pathways whose signaling has been found to be crucial during this period in the life history of many model organisms and whose functions have been well conserved between species. Two of those are the Notch and Hedgehog signal transduction pathways. Previous work established that the Notch pathway is important in the specification of mesoderm in the sea urchin embryo. Here it is established that the Hedgehog pathway is important for mesoderm patterning in the echinoderm embryo.In many animals, including the sea urchin, endomesoderm is specified as a bipotential tissue which is then subdivided through cell signaling to become endoderm and mesoderm. Notch signaling was found to be critical for that dichotomy; endomesoderm that received the Notch signal becomes mesoderm, the remaining endomesoderm becomes endoderm. Prior to this work, no functional roles for Hedgehog signaling in the sea urchin had been defined, though this pathway is known to operate in organisms throughout the animal kingdom. Here we find through analysis and comparison of the sea urchin genome with cnidarians, arthropods, urochordates, and vertebrates that key components and modifiers of the Notch and Hedgehog signaling pathways are well conserved among metazoans. Many animals contain the full suite of genes that constitute both pathways, and in deuterostomes the pathways operate in embryos to mediate similar fate decisions. The Notch pathway, for example, is engaged in endomesoderm gene regulatory networks and in neural functions. In the sea urchin RNA in situ hybridization of Notch pathway members confirms that Notch functions sequentially in the vegetal-most secondary mesenchyme cells and later in the endoderm.The Hh signaling pathway is essential for patterning of many structures in vertebrates ranging from the nervous system, chordamesoderm, and limb to endodermal organs. In the sea urchin, a basal deuterostome, we show that Hedgehog (Hh) signaling participates in organizing the mesoderm. During gastrulation expression of the Hh ligand is localized to the endoderm while the co-receptors Patched (Ptc) and Smoothened (Smo) are expressed in the neighboring secondary mesoderm and in the ventrolaterally clustered primary mesenchyme cells where skeletogenesis initiates. Perturbations of Hh signaling cause embryos to develop with skeletal defects, as well as inappropriate secondary mesoderm patterning, although initial specification of secondary mesoderm occurs normally. Perturbations of Hedgehog pathway members altered normal numbers of pigment and blastocoelar cells, randomized left-right signaling in coelomic pouches, and resulted in disorganization of the circumesophageal muscle, causing an inability to perform peristaltic movements. Together our data support the requirement of Hh signaling in patterning each of the mesoderm subtypes in the sea urchin embryo.Activation of the Hedgehog pathway requires FoxA acting upstream of Hedgehog transcription, early in gastrulation. When FoxA is knocked-down there is a loss of transcription of Hedgehog and Hh expression is expanded in embryos expressing ectopic FoxA. In collaboration with another lab, we found that FoxA acts to repress mesodermal genes within the endoderm as part of the endomesoderm dichotomy. If FoxA expression is reduced by a morpholino, more endomesoderm cells become pigment and other mesenchymal cell types, and less gut is specified. Conversely, when FoxA is ectopically expressed, endoderm is increased at the expense of mesoderm. More specifically we found through mosaic analysis that FoxA acts in a portion of the endomesoderm derived from one of two tiers of vegetal cells at the 60 cell stage called the veg2 cells. FoxA remains on in all endoderm and its territory of expression is superimposeable with the location of Hh expression.The data we present here together with previous studies suggest a model in which Notch signaling cues cells of the endomesoderm to become mesoderm, while cells of the nascent endoderm upregulate FoxA. FoxA ensures proper partitioning of endoderm from mesoderm by repressing mesoderm genes, as well as positively regulating transcription of Hedgehog in the endoderm. The Ptc and Smo transducing apparatus is separately expressed in mesoderm. Hh then signals to its receptors in the mesoderm to convey patterning information of tissues derived from that mesoderm. Thus, Hh, Ptc and Smo molecules diverge during specification then converge during signaling to play important roles in mesoderm development in the sea urchin.
Type
Dissertation
Department
Biology
Subject
Biology, Cell
Biology, Molecular
Biology, Cell
Development
mesoderm
endoderm
cell signaling
network
Permalink
https://hdl.handle.net/10161/451
Citation
Walton, Katherine Dempsey (2007). Segregating and Patterning Mesoderm from Endoderm: Emerging Roles for Hedgehog and FoxA. Dissertation, Duke University. Retrieved from https://hdl.handle.net/10161/451.
Collections
More Info
Show full item record