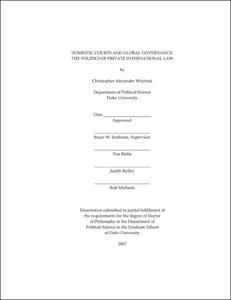 View / Download
1.5 Mb
Date
Author
Whytock, Christopher A.
Advisor
Jentleson, Bruce W.
Repository Usage Stats
891
views
1,143
downloads
Abstract
Since the mid-1980s, U.S. and foreign parties have filed more than 100,000 lawsuits in U.S. federal courts asking for adjudication of disputes arising from transnational activity. These lawsuits raise a fundamental question of global governance: Who governs? Should the United States assert its authority to adjudicate a transnational dispute, or should it defer to the adjudicative authority of a foreign state that also has connections with the underlying activity? Should the United States assert its authority to prescribe the rules governing that activity, or should it defer to foreign prescriptive authority? U.S. district courts routinely face these questions in transnational litigation, and by answering them they help allocate governance authority among states. To shed light on the role of domestic courts in global governance, this dissertation asks: How often and under what circumstances do U.S. district courts defer to foreign authority to govern transnational activity rather than asserting domestic authority? Drawing on private international law scholarship and theories of international relations, judicial behavior, and bounded rationality, I develop a series of hypotheses about the legal and political factors that influence judicial allocation of governance authority. I then statistically test these hypotheses using original data on U.S. district court decisionmaking in two transnational litigation settings: the allocation of adjudicative authority under the forum non conveniens doctrine, and the allocation of prescriptive authority under various choice-of-law methods. Contrary to the conventional wisdom that U.S. judges are reluctant to defer to foreign authority, I find that they defer at a rate of approximately 50% in both settings. And notwithstanding claims that legal doctrine does not significantly affect judicial decisionmaking, I present evidence suggesting that the forum non conveniens doctrine and choice-of-law doctrine both influence judicial allocation of governance authority. There is evidence of both direct doctrinal effects, as contemplated by legalist theory, and indirect doctrinal effects, resulting from the use of judicial heuristics which allow judges to conserve scarce decisionmaking resources while making decisions that achieve acceptable levels of legal quality. Significant political factors include whether the foreign state is a liberal democracy, the domestic political environment, and U.S. parties' preferences.
Type
Dissertation
Department
Political Science
Subject
Political Science, International Law and Relations
Law
Political Science, General
International Law
Judicial Behavior
International Relations
Courts
Transnational Litigation
Governance
Permalink
https://hdl.handle.net/10161/452
Citation
Whytock, Christopher A. (2007). Domestic Courts and Global Governance: the Politics of Private International Law. Dissertation, Duke University. Retrieved from https://hdl.handle.net/10161/452.
Collections
More Info
Show full item record