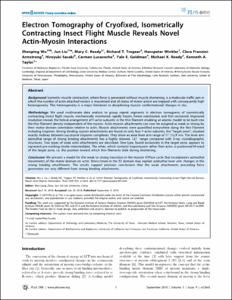 Professor Emeritus of Cell Biology
Among known muscles, none show greater macromolecular order than certain insect flight muscles (IFM). Our favorite IFM is that of giant Lethocerus waterbugs. Even after permeabilization, glycerination, and months to years of storage at -80&#176;C, its near-crystalline lattices of myofilaments and crossbridges preserve unimpaired mechanical and structural responses in (and transitions between) a multitude of physiological and pharmacological states. With collaboration from five outside labs,
This author no longer has a Scholars@Duke profile, so the information shown here reflects their Duke status at the time this item was deposited.