Joint spatial variability of aerosol, clouds and rainfall in the Himalayas from satellite data 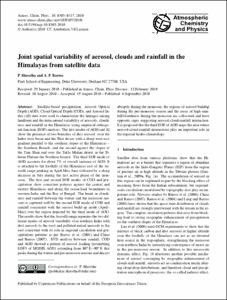 View / Download
3.3 Mb
Date
Authors
Shrestha, P
Barros, AP
Repository Usage Stats
288
views
192
downloads
Abstract
Satellite-based precipitation, Aerosol Optical Depth (AOD), Cloud Optical Depth (COD), and Aerosol Index (AI) data were used to characterize the linkages among landform and the intra-annual variability of aerosols, cloudiness and rainfall in the Himalayas using empirical orthogonal function (EOF) analysis. The first modes of AOD and AI show the presence of two branches of dust aerosol: over the Indus river basin and the Thar desert with a sharp west-east gradient parallel to the southern slopes of the Himalayas the Southern Branch; and the second against the slopes of the Tian Shan and over the Takla Makan desert in the Tibetan Plateau-the Northern branch. The third EOF mode of AOD accounts for about 7% of overall variance of AOD. It is attached to the foothills of the Himalayas east of the Aravalli range peaking in April-May-June followed by a sharp decrease in July during the first active phase of the monsoon. The first and second EOF modes of COD and precipitation show consistent patterns against the central and eastern Himalayas and along the ocean-land boundaries in western India and the Bay of Bengal. The break in cloudiness and rainfall between the winter and the monsoon seasons is captured well by the second EOF mode of COD and rainfall concurrent with the aerosol build up mode (April-May) over the region depicted by the third mode of AOD. The results show that the Aravalli range separates the two different modes of aerosol variability over northern India with dust aerosols to the west and polluted mixed aerosols to the east consistent with its role in regional circulation and precipitations patterns as per Barros et al. (2004) and Chiao and Barros (2007). SVD analysis between rainfall, COD and AOD showed a pattern of aerosol loading (resembling EOF3 of MODIS AOD) extending from 80° E∼90° E that peaks during the winter and pre-monsoon seasons and decays abruptly during the monsoon: the regions of aerosol buildup during the pre-monsoon season and the areas of high rainfall/cloudiness during the monsoon are collocated and have opposite signs suggesting aerosol-cloud-rainfall interaction. It is proposed that the third EOF of AOD maps the area where aerosol-cloud-rainfall interactions play an important role in the regional hydro-climatology. © Author(s) 2010.
Type
Journal article
Permalink
https://hdl.handle.net/10161/4619
Published Version (Please cite this version)
10.5194/acp-10-8305-2010
Publication Info
Shrestha, P; & Barros, AP (2010). Joint spatial variability of aerosol, clouds and rainfall in the Himalayas from satellite data. Atmospheric Chemistry and Physics, 10(17). pp. 8305-8317. 10.5194/acp-10-8305-2010. Retrieved from https://hdl.handle.net/10161/4619.
This is constructed from limited available data and may be imprecise. To cite this article, please review & use the official citation provided by the journal.
Collections
More Info
Show full item record