Towards an Ecumenical Understanding of the Eucharist: A Proposal for Pentecostals 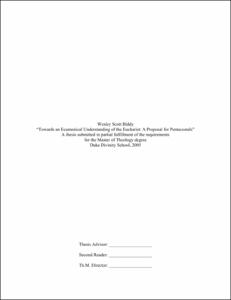 View / Download
279.6 Kb
Date
Author
Biddy, Wesley Scott
Repository Usage Stats
661
views
1,047
downloads
Abstract
Historically, most Pentecostals have tended to be wary of the concept of "sacraments," and accordingly have favored a purely memorialist understanding of the Lord's Supper or Eucharist. Yet the resources latent in Pentecostal spirituality hold much potential for developing a conscious theological appreciation of the sacramental character of worship in general, and of certain ecclesial practices in particular. My goal in this thesis is to investigate that potential so as to demonstrate how, if shaped in a certain way, this area of Pentecostal theology can aid doctrinal rapprochement between Pentecostals and other groups of Christians. I begin by clearing a space for talking about sacraments generally from a Pentecostal perspective and then narrow my focus to the Eucharist. Turning to the Wesleyan roots from which many Pentecostal groups sprang, I argue that a retrieval of the Wesleys' understanding of this "means of grace" should be amenable to Pentecostals for a number of reasons and would be ecumenically profitable for dialogue with Methodists, Reformed, and Anglican Christians—and, indeed, with at least some Roman Catholics. I engage various theologians who represent those traditions to determine where Pentecostalism might be able to appropriate some of their ideas, but I also outline a frame of reference within which it might develop its own distinctive take on the Eucharist, a move that would be both internally and ecumenically constructive.
Description
Master of Theology
Type
Master's thesis
Subject
Pentecostal
Eucharist
Permalink
https://hdl.handle.net/10161/462
Citation
Biddy, Wesley Scott (2005). Towards an Ecumenical Understanding of the Eucharist: A Proposal for Pentecostals. Master's thesis, Duke University. Retrieved from https://hdl.handle.net/10161/462.
Collections
More Info
Show full item record