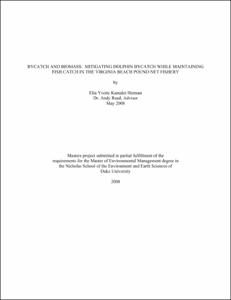 View / Download
18.5 Mb
Date
Author
Herman, Elia
Advisor
Read, Andy
Repository Usage Stats
359
views
138
downloads
Abstract
Pound nets are traditional, passive fishing traps that have been used since the 1870s to catch estuarine fish species in the Chesapeake Bay. Most unwanted species captured in the actual pound net can be released alive; however, sea turtles and marine mammals may die if they become entangled in the leader of the net. In 2004, NOAA Fisheries required changes in the construction of pound net leaders in part of the Chesapeake Bay to reduce entanglement rates of sea turtles. To date no actions have been taken to address the bycatch of bottlenose dolphins in pound net leaders. In the summer of 2007, I conducted a pilot study to sample catches of butterfish (Peprilus alepidotus and Peprilus triacanthus) and Spanish mackerel (Scomberomorus maculatus) in a Virginia Beach pound net fishery considering modifications to their leaders to reduce dolphin bycatch. Using these observations, I worked with the Virginia Aquarium to design an experiment to test the new leaders during the 2008 fishing season. The primary goal of this experiment is to determine whether the experimental leader will affect the catch of target fish species. From an analysis of dolphin strandings in Virginia from 1997-2004, I found that pound nets accounted for the greatest percentage (50%) of all documented Human Interaction (HI) strandings. I also used geospatial analyses to examine the distribution of bottlenose dolphin strandings that may be associated with bycatch in pound nets. HI stranded dolphins were found significantly closer to the Virginia Beach pound nets than dolphins that stranded for another reason (No HI) or for an unknown cause (CBD). Together these analyses help to improve our understanding of interactions between bottlenose dolphins and the Virginia Beach pound net fishery, as well as the importance of community-based management efforts.
Type
Master's project
Department
Nicholas School of the Environment and Earth Sciences
Subject
pound net
Bycatch
Bottlenose dolphins (Tursiops truncatus)
strandings
fishery
Permalink
https://hdl.handle.net/10161/465
Citation
Herman, Elia (2008). Bycatch and Biomass: Mitigating dolphin bycatch while maintaining fish catch in the Virginia Beach pound net fishery. Master's project, Duke University. Retrieved from https://hdl.handle.net/10161/465.
Collections
More Info
Show full item record