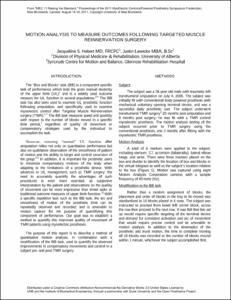 View / Download
481.9 Kb
Date
Authors
Hebert, Jacqueline S.
Lewicke, Justin
Repository Usage Stats
457
views
294
downloads
Abstract
The ‘Box and Blocks’ task (BB) is a component specific task of performance which tests the gross manual dexterity of the upper limb (UL) and is a widely used outcome measure for UL function in several populations. The BB task has also been used to examine UL prosthetic function following amputation, and specifically used to examine myoelectric control after Targeted Muscle Reinnervation surgery (TMR). The BB task measures speed and quantity with respect to the number of blocks moved in a specific time period, regardless of quality of movement or compensatory strategies used by the individual to accomplish the task. However, restoring “normal” UL function after amputation relies not only on quantitative performance but also on qualitative observation of the smoothness of pattern of motion and the ability to target and control excursion of the grasp. In addition, it is important for prosthetic users to minimize compensatory motions of the body when adapting to the limitations of a prosthetic device. With advances in UL management, such as TMR surgery, the need to accurately quantify the advantages of such procedures is even more essential, as subjective interpretation by the patient and observations on the quality of movement can be more impressive than timed tasks or traditional outcome measures of upper limb function. With a specific repetitive task such as the BB task, the arc and smoothness of motion of the prosthetic limb can be repeatedly observed and recorded; and is amenable to motion capture for the purpose of quantifying this component of performance. Our goal was to establish a method to quantify this improved quality of movement of TMR patients using myoelectric prostheses. The purpose of this report is to describe a method of quantitative motion analysis, in combination with a modification of the BB task, used to quantify the observed improvements in compensatory movements and control in a subject pre- and post-TMR surgery.
Permalink
https://hdl.handle.net/10161/4707
Citation
Proceedings of the MEC’11 conference, UNB; 2011.
Collections
More Info
Show full item record