Towards A Universal Coupler Design For Modern Powered Prostheses 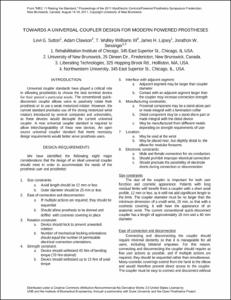