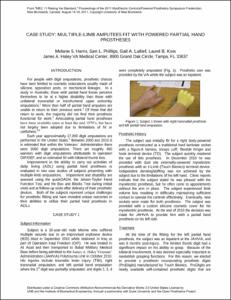 View / Download
443.9 Kb
Date
Authors
Harris, Melanie S.
Phillips, Sam L.
Latlief, Gail A.
Laurel B. Koss
Repository Usage Stats
643
views
802
downloads
Abstract
For people with digit amputations, prosthetic choices have been limited to cosmetic restorations usually made of silicone, opposition posts, or mechanical linkages. In a study in Australia, those with partial hand losses perceive themselves to be at a higher disability than those with unilateral transradial or transhumeral upper extremity amputations. More than half of partial hand amputees are unable to return to their previous work. Of those that did return to work, the majority did not find their prosthesis functional for work. Articulating partial hand prostheses have been available since at least the mid 1970’s, but have not largely been adopted due to limitations of fit or usefulness. Each year approximately 17,000 digit amputations are performed in the United States. Between 2000 and 2010 it is estimated that within the Veterans’ Administration there were 3000 digit amputations. There are roughly 400 warriors with digit amputations attributable to operation OIF/OEF, and an estimated 50 with bilateral thumb loss. Improvement in the ability to carry out activities of daily living (ADL) using partial hand prostheses is evaluated in two case studies of subjects presenting with multiple-limb amputations. Impairment and disability are assessed using the quickDASH, the Jebsen-Taylor Hand Function Test, and the Box and Blocks Test during initial visits and at follow-up visits after delivery of their prosthetic devices. Both of the subjects represent unique challenges for prosthetic fitting and have revealed unique outcomes in their abilities to utilize their partial hand prosthesis in ADLs.
Permalink
https://hdl.handle.net/10161/4744
Citation
Proceedings of the MEC'11 conference, UNB; 2011.
Collections
More Info
Show full item record