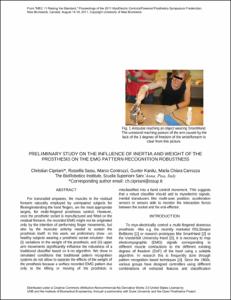 View / Download
542.6 Kb
Date
Authors
Cipriani, Christian
Sassu, Rossella
Controzzi, Marco
Kanitz, Gunter
Carrozza, Maria Chiara
Repository Usage Stats
644
views
575
downloads
Abstract
For transradial amputees, the muscles in the residual forearm naturally employed by unimpaired subjects for flexing/extending the hand fingers, are the most appropriate targets, for multi-fingered prostheses control. However, once the prosthetic socket is manufactured and fitted on the residual forearm, the recorded EMG might not be originated only by the intention of performing finger movements, but also by the muscular activity needed to sustain the prosthesis itself. In this work, we preliminary show –on healthy subjects wearing a prosthetic socket emulator– that (i) variations in the weight of the prosthesis, and (ii) upper arm movements significantly influence the robustness of a traditional classifier based on k-nn algorithm. We show in simulated conditions that traditional pattern recognition systems do not allow to separate the effects of the weight of the prosthesis because a surface recorded EMG pattern due only to the lifting or moving of the prosthesis is misclassified into a hand control movement. This suggests that a robust classifier should add to myoelectric signals, inertial transducers like multi-axes position, acceleration sensors or sensors able to monitor the interaction forces between the socket and the end-effector.
Permalink
https://hdl.handle.net/10161/4748
Citation
Proceedings of the MEC'11 conference, UNB; 2011.
Collections
More Info
Show full item record