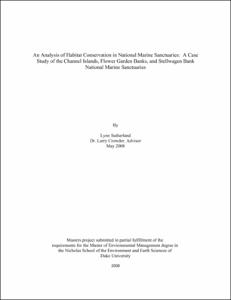 View / Download
3.0 Mb
Date
Author
Sutherland, Lynn
Advisor
Crowder, Larry
Repository Usage Stats
337
views
742
downloads
Abstract
The evolution of ocean governance began in the late 1960s and early 1970s with a number of resource-specific acts aimed at protecting certain species or environments. In the midst of this legislative activity, policy-makers realized that current measures would not protect all aspects of a marine environment. The result of this realization was the enactment of the Marine Protection, Research, and Sanctuaries Act of 1972, Title III of which is now known as the National Marine Sanctuaries Act (NMSA). The NMSA was the first, and remains the only, place- and ecosystem-based piece of ocean management. The mission given the National Marine Sanctuary Program (NMSP) was to manage and protect these areas while incorporating existing regulatory authorities, facilitating between multiple jurisdictions, and representing the interests of all international, public, and private communities and their uses. Given the continuing decline of our ocean environments, and increasing recommendations to move towards the type of management the NMSP practices, there is a need to better understand the current status of the program and how it can be improved. This masters project evaluates the progress the NMSP has made towards achieving its mandate of resource protection, focusing on habitat conservation. Research was undertaken to investigate the Program as a whole, in addition to habitat protection in three individual sanctuaries. Inquiries focused on four key conservation project components: goals and objectives; science and monitoring; management tools; and, performance measures. An evaluation method already in use by the NMSP was modified to assess habitat conservation at the program and the individual site levels based on the four components. Results indicate that while the Program does have habitat conservation as a working goal, methods implemented to better guide individual sanctuaries in achieving this goal are recent. As a consequence, the new program measures are still being incorporated into each sanctuary management structure. Time will therefore be required for the program’s achievements to be recognized at the site level. The results of the case studies indicate varying degrees of habitat conservation per site. While one site was able to facilitate and regulate a good measure of protection, another study essentially failed on both levels and continual degradation of the habitat in this region readily occurs. A multitude of factors influence the performance of each sanctuary and ultimately, the sanctuary is only as good as the sum of its many parts.
Type
Master's project
Department
Nicholas School of the Environment and Earth Sciences
Subject
Habitat Conservation
National Marine Sanctuaries
Channel Islands National Marine Sanctuary
Flower Garden Banks National Marine Sanctuary
Stellwagen Bank National Marine Sanctuary
National Marine Sanctuaries Act
Permalink
https://hdl.handle.net/10161/480
Citation
Sutherland, Lynn (2008). An Analysis of Habitat Conservation in National Marine Sanctuaries: A Case Study of the Channel Islands, Flower Garden Banks, and Stellwagen Bank National Marine Sanctuaries. Master's project, Duke University. Retrieved from https://hdl.handle.net/10161/480.
Collections
More Info
Show full item record