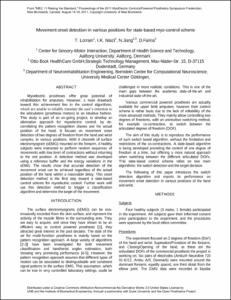 View / Download
366.0 Kb
Date
Authors
Lorrain, T.
Niazi, I. K.
Jiang, N.
Farina, D.
Repository Usage Stats
386
views
285
downloads
Abstract
Myoelectric prostheses offer great potential of rehabilitation for amputees. However, a main drawback toward this achievement lies in the control algorithms, which are unable to reliably translate the user’s intention to the articulators (prosthesis motors) in an intuitive fashion. This study is part of an on-going project, to develop an alternative approach for myoelectric control, by de-correlating the pattern recognition classes and the actual position of the hand. It focuses on movement onset detection of two degrees of freedom from the hand and wrist complex, in various positions. With 6 channels of surface electromyogram (sEMG) mounted on the forearm, 4 healthy subjects were instructed to perform random sequences of movements with low level of contractions without returning to the rest position. A detection method was developed using a reference buffer and the energy variations in the sEMG. The results show that accurate detection of the movement onset can be achieved regardless of the actual position of the hand within a reasonable delay. This onset detection method is the first step toward a state-based control scheme for myoelectric control. Further work will use this detection method to trigger a classification algorithm and determine the target of the movement.
Permalink
https://hdl.handle.net/10161/4808
Citation
Proceedings of the MEC'11 conference, UNB; 2011.
Collections
More Info
Show full item record