Contamination by the Israeli Military Industry and its Impact on Apartment Sale Prices in an Adjacent Tel-Aviv Neighborhood: A Hedonic Pricing Model Study 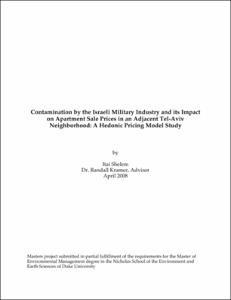 View / Download
208.0 Kb
Date
Author
Shelem, Itai
Advisor
Kramer, Dr. Randall
Repository Usage Stats
747
views
1,871
downloads
Abstract
A window of opportunity opened to investigate present effects of past environmental policies of the Israel Defense Forces and its military industry when one of its facilities, Taas Magen, was required to close down in 1997. For decades, untreated discharge was released into absorption pits, which contaminated the soil and groundwater with many toxic compounds, including the carcinogen trichloroethylene. Surrounding the industrial facility is a housing market, consisting of more than 11,000 apartments, directly affected by the contamination. This hedonic pricing model study quantifies the effect of the environmental degradation due to the operations of Taas Magen on the nearby housing market. This was achieved by examining the effect distance away from Taas had on apartment sale prices. Results show that apartments near the facility were more negatively impacted than those further away. Next, the model was expanded to isolate the impact of the contamination from that of the facility by incorporating information regarding the public’s awareness of the degradation. The resulting regression coefficients suggest that only after public acknowledgement of the harm did distance significantly impact prices. Therefore, it is the environmental contamination and not necessarily the facility that negatively impacted prices. As a result of the contamination, the mean apartment price loss was -$24,650.74 (’06 dollars), which is approximately 14% of an apartment’s average value. Losses to the surrounding housing market are estimated at $267 to $287 million. These are only a minimum of the total social and economic costs incurred by the greater community, which are estimated to total at least $358 million. Assuming the government were to fund the estimated $33 million cleanup costs, a minute gain of 1.5% in the value of this $2.2 billion housing market would create the necessary economic benefit to offset the cost of decontaminating the site. Similarly, a more technologically advanced, yet expensive, iron nanoparticle remediation process would require a gain of 10.1% to offset its costs. Such market gains are not unreasonable given a drastic decrease in environmental harms. Furthermore, reclaiming a lost aquifer, reduction in human health risks, restoration of environmental integrity, and further increases to the housing market are all benefits of remediation that may greatly overshadow the concomitant cleanup costs. Future research should focus on quantifying all these benefits. With such information at hand, it will undoubtedly become apparent that remediation is socially and economically feasible.
Type
Master's project
Department
Nicholas School of the Environment and Earth Sciences
Subject
environment
hedonics
contamination
housing market devaluation
econometrics
environmental economics
Permalink
https://hdl.handle.net/10161/482
Citation
Shelem, Itai (2008). Contamination by the Israeli Military Industry and its Impact on Apartment Sale Prices in an Adjacent Tel-Aviv Neighborhood: A Hedonic Pricing Model Study. Master's project, Duke University. Retrieved from https://hdl.handle.net/10161/482.
Collections
More Info
Show full item record