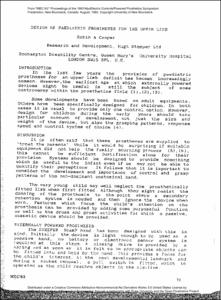 View / Download
693.2 Kb
Date
Author
Cooper, Robin A.
Repository Usage Stats
198
views
179
downloads
Abstract
In the last few years the provision of prostheses for paediatric an upper limb deficit has become increasingly common. However,the earliest age at which externally powered devices might be useful is still the subject of some controversy within the prosthetics field. Some developments have been based on adult equipments. Others have been specifically designed for children. In both dcaessiegsn it foisr usual to provide only one control option However, children during the early years should take particular account of development, not just the size and weight of the device, but also the grasping patterns, response speed and control system of choice.
Permalink
https://hdl.handle.net/10161/4825
Citation
From "MEC 93," Proceedings of the 1993 MyoElectric Controls/Powered Prosthetics Symposium Fredericton, New Brunswick, Canada: August, 1993. Copyright University of New Brunswick.
Collections
More Info
Show full item record