The Liberty Myoarraytm: A Diagnostic Tool To Test And Train Amputees To Use Myoelectric Prostheses 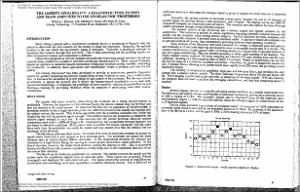 View / Download
843.8 Kb
Date
Authors
Hanson, William J.
Smits, Matthijs P.
Teare, Peter R.
Repository Usage Stats
263
views
197
downloads
Abstract
When fitting a patient with a myoelectric prosthetic device, a prosthetist or therapist tests the patient to determine the best location on the muscle to place the electrodes Generally, the optimal location is the one where the myoelectic signal is strongest Typically, a prosthetist attempts to determine this location through trial-and-error,. This is time-consuming and the resulting signals are often inconsistent because each contraction is different. Others have proposed or utilized multiple electrodes for monitoring muscle activity and one research study resulted in a system to facilitate muscle-site identification. These systems however, depend on repetitive or sustained muscle contractions which may introduce another variable, misleading the prosthetist In addition, these approaches take significantly longer to perform and may tire the patient. The Liberty MyoArray* has been developed to provide an easy-to-use, portable diagnostic system for quickly measuring myoelectric signals from several locations at once, over a wide muscle area It increases the likelihood of proper patient fit and control of the prosthesis. For the experienced prosthetists, it speeds the process and it allows the inexperienced prosthetists to succeed with myoelectric technology It eliminates the possibility of error caused by variation in muscle flexions and facilitates training by providing feedback while the amputee is performing controlled muscle contractions.
Permalink
https://hdl.handle.net/10161/4834
Citation
From "MEC 93," Proceedings of the 1993 MyoElectric Controls/Powered Prosthetics Symposium Fredericton, New Brunswick, Canada: August, 1993. Copyright University of New Brunswick.
Collections
More Info
Show full item record