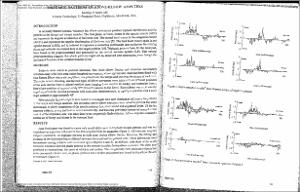 View / Download
669.5 Kb
Date
Author
Smitts, Matthijs
Repository Usage Stats
286
views
207
downloads
Abstract
In normally limbed humans, voluntaty fast elbow movements produce triphasic myoelectric activity patterns in the biceps and triceps muscles. The first phase, or burst, occurs in the agonist muscle (AG1) and represents the angular acceleration of the lower aim The second bunt occurs in the antagonist muscle (ANTI) and represents the angular deceleration of the lower arm. The third burst occurs again in the agonnt muscle (AG2), and is believed to represent a correction mechanism that moderates the braking forces and redirects movement back to the target position. Triphasic patterns have, for the most part, been found to be preprogrammed and generated by the central nervous system. This central preprogramming suggests that phasic patterns might still be observed after amputation, even though the mecharucal function of the remnant muscles is lost.
Permalink
https://hdl.handle.net/10161/4837
Citation
From "MEC 93," Proceedings of the 1993 MyoElectric Controls/Powered Prosthetics Symposium Fredericton, New Brunswick, Canada: August, 1993. Copyright University of New Brunswick.
Collections
More Info
Show full item record