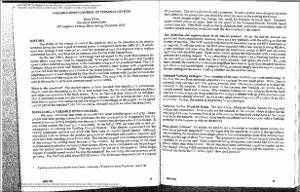 View / Download
683.3 Kb
Date
Author
Dillon, Steve
Repository Usage Stats
231
views
196
downloads
Abstract
The ability of the wearer to control the speed as well as the direction of an electric terminal device has been a goal of external power development since the 1940's. It would have been strange if this were not so, since the purpose of such development was to replace anatomical function, and there are no constant speed joints in the human body. By the late 1960s, electronic technology had advanced to the point that systems for below elbow amputees could be commercially developed but not to the point that variable speed control could be accomplished in the restrictive volume of the prosthetic hand. The U.S. Veterans Administration and Fidelity Electronics offered a hand system with proportional control but with the battery and circuits in the lower forearm. This system gained minimal acceptance and has been displaced by Otto Bock's modular system with the electronics in the hand and two over-the-muscle electrode-amplifiers. The simplicity of the Bock system has won in the market in spite of its constant speed motor control.
Permalink
https://hdl.handle.net/10161/4839
Citation
From "MEC 93," Proceedings of the 1993 MyoElectric Controls/Powered Prosthetics Symposium Fredericton, New Brunswick, Canada: August, 1993. Copyright University of New Brunswick.
Collections
More Info
Show full item record