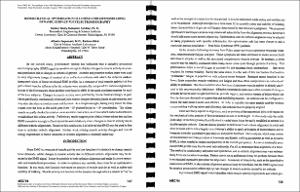 View / Download
672.7 Kb
Date
Authors
Talaty, Mukul
Seliktar, Rahamim
Repository Usage Stats
276
views
193
downloads
Abstract
In the current study, preliminary testing has indicated that a suitably processed electromyography (EMG) signal is sensitive enough to display changes in muscle activity in a normal population due to changes in oithotic alignment. Anterior and posterior motion stops were used to vary alignments (range of motion) of an ankle foot orthosis with which the subjects walked. Iritegrated values of linear enveloped EMG profiles (as a measure of total muscle activity) of five gait related muscles influenced by the orthosis were statistically compared for various alignments In four of the five muscles, these profiles were found to differ in the same consistent marmer for each of the four subjects. Changes in muscle activity were justified by biomechanical changes in gait. More specifically, mechanically restricted joint motion changes demands placed on gait muscles, and may also alter their activation onset and duration As a simple example, during early stance the tibia rotates over the foot as the anide goes from ~15° plantarflexion to ~15° dorsiflexion. The soleus muscle normally checks this rotation via an eccentric contraction, so a brace which restricts dorsiflexion would reduce this soleus activity Pr eliminary results support prior clinical observations that surface EMG is sensitive enough to discriminate between relatively minor changes in muscle activity due to different orthotic alignments. Based on this conclusion, it is believed that EMG may be used to fine tune or optimize orthotic alignment. Further work relating muscle activity changes and overall energy expenditure to minor variations in or thotic alignment is currently underway.
Permalink
https://hdl.handle.net/10161/4840
Citation
From "MEC 94," Proceedings of the 1993 MyoElectric Controls/Powered Prosthetics Symposium Fredericton, New Brunswick, Canada: August, 1994. Copyright University of New Brunswick.
Collections
More Info
Show full item record