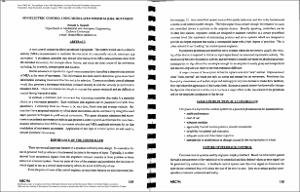 View / Download
512.0 Kb
Date
Author
Russell, Donald L.
Repository Usage Stats
993
views
138
downloads
Abstract
A new control system for elbow prostheses is proposed. The system would use myoelecuic activity (MEA) meastuements to modulate the execution of a maxirnally smooth, minimum jerk movement A prosthesis controller may extract information from MEA meastuements about both the intended movement, for example elbow flexion, and about the time course of the movement including, for example, average speed and duration. Recent advances in myoelectric signal measurement have identified a deterministic portion of MEA at the onset of movement This information has been used to determine gross movement information, including movement direction and joint selection Common prosthetic control schemes would then generate a movement with either constant velocity or with the velocity proportional to measured MEA. These movements are simple in concept but appear unnatural and are difficult to control during interactive tasks. In contrast, a minimum jeik movement has interesting properties that make it a plausible choice as a movement primitive Each minitnum jerk segment can be parameterized with three par ameter s Commonly these are chosen to be start time, finish time and average velocity. Researchers have proposed methods by which these movements can be combined by straightfor ward super-position tecluilques to yield natural movements This paper discusses minimum jerk movements as prosthesis movement primitives and presents a control system architecture that uses deterministic information from MEA for movement selection and MEA amplitude estimates for on-line modulation of movement parameters Application of this type of control system should result in smooth prosthetic movements.
Permalink
https://hdl.handle.net/10161/4846
Citation
From "MEC 94," Proceedings of the 1993 MyoElectric Controls/Powered Prosthetics Symposium Fredericton, New Brunswick, Canada: August, 1994. Copyright University of New Brunswick.
Collections
More Info
Show full item record