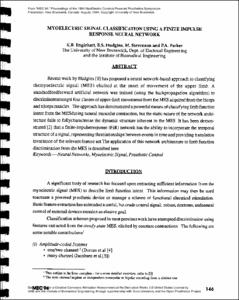 View / Download
831.0 Kb
Date
Authors
Englehart, K. B.
Hudgins, B. S.
Stevenson, M.
Parker, P. A.
Repository Usage Stats
242
views
296
downloads
Abstract
Recent work by Hudgins has proposed a neural network-based approach to classifying themyoelectric signal (MES) elicited at the onset of movement of the upper limb. A standard feed forward artificial network was trained (using the backpropagation algorithm) to discriminatearnongst four classes of upper-limb movements from the MES acquired from the biceps and triceps muscles The approach has demonstrated a powerful means of classifying limb function intent from the MES during natural muscular contraction, but the static nature of the network architecture fails to fullycharacterize the dynamic structure inherent in the MES. It has been demonstrated that a finite-impulseresponse (FIR) network has the ability to incorporate the temporal structure of a signal, representing the relationships between events in time and providing translation invariance of the relevant feature set. The application of this network architecture to limb function discrimination from the MES is described here.
Subject
Neural Networks
Myoelectric Signal
Prosthetic Control
Permalink
https://hdl.handle.net/10161/4847
Citation
From "MEC 94," Proceedings of the 1993 MyoElectric Controls/Powered Prosthetics Symposium Fredericton, New Brunswick, Canada: August, 1994. Copyright University of New Brunswick.
Collections
More Info
Show full item record