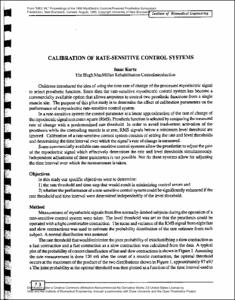 View / Download
361.0 Kb
Date
Author
Kurtz, Isaac
Repository Usage Stats
247
views
154
downloads
Abstract
Childress introduced the idea of using the time rate of change of the processed myoelectric signal to select prosthetic function. Since then the rate-sensitive myoelectric control system has become a commercially available option that allows amputees to control two prosthetic functions from a single muscle site. The purpose of this pilot study is to determine the effect of calibration parameters on the performance of a myoelectric rate-sensitive control system. In a rate-sensitive system the control parameter is a linear appr oximation of the rate of change of the myoelectric signal root mean square (RMS). Prosthetic function is selected by comparing the measured rate of change with a predetermined rate threshold. In order to avoid inadvertent activation of the prosthesis while the controlling muscle is at rest, RMS signals below a minimum level threshold are ignored. Calibration of a rate-sensitive control system consists of setting the rate and level thresholds and determining the time interval over which the signal's rate of change is measured. Some commercially available rate-sensitive control systems allow the pi osthetist to adjust the gain of the myoelectric signal which effectively determines the rate and level thresholds simultaneously. Independent adjustment of these parameters is not possible Nor do these systems aLlow for adjusting the time interval over which the measurement is taken.
Permalink
https://hdl.handle.net/10161/4859
Citation
From "MEC 95," Proceedings of the 1995 MyoElectric Controls/Powered Prosthetics Symposium Fredericton, New Brunswick, Canada: August, 1995. Copyright University of New Brunswick.
Collections
More Info
Show full item record