Lessons For Researchers From The Canadian Thalidomide Experience 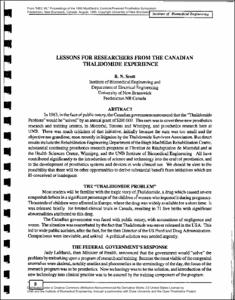 View / Download
617.9 Kb
Date
Author
Scott, R. N.
Repository Usage Stats
418
views
540
downloads
Abstract
In 1963, in the face of public outcry, the Canadian govenunent announced that the "Thalidomide Problem" would be "solved" by an armual grant of $200 000. This sum was to cover three new prosthetics research and training centres, in Montreal, Toronto and Winnipeg, and prosthetics research here at UNB. There was much criticism of that initiative, initially because the sum was too small and the objective too gr andiose, most recently in litigation by the Thalidomide Survivors Association. But direct results include the Rehabilitation Engineering Department of the Hugh MacMillan Rehabilitation Centre, substantial continuing prosthetics research programs at l'Institut de Readaptation de Montreal and at the Health Sciences Centre, Winnipeg, and the UNB Institute of Biomedical Engineering All have contributed significantly to the intz oduction of science and technology into the craft of prosthetics, and to the development of prosthetics systems and devices in wide clinical use. We should be alert to the possibility that there will be other opportunities to derive substantial benefit from initiatives which are ill-conceived or inadequate.
Permalink
https://hdl.handle.net/10161/4870
Citation
From "MEC 95," Proceedings of the 1995 MyoElectric Controls/Powered Prosthetics Symposium Fredericton, New Brunswick, Canada: August, 1995. Copyright University of New Brunswick.
Collections
More Info
Show full item record