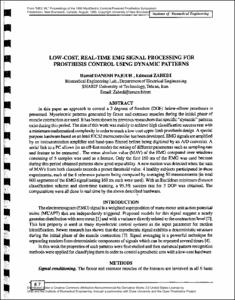 View / Download
665.3 Kb
Date
Authors
Danesh Pajoug, Hamid
Zahedi, Edmond
Repository Usage Stats
619
views
1,169
downloads
Abstract
In this paper an approach to control a 3 degrees of freedom (DOF) below-elbow prosthesis is presented . Myoelectic patterns generated by flexor and extensor muscles during the initial phase of muscle contraction are used. It has been shown by previous researcher s that specific "dynamic" patterns exist during this period. The aim of this work was mainly to achieve high classification success rate with a minimum mathematical complexity in order to reach a low-cost upper-limb pr osthesis design. A special purpose hardware based on an Intel 87C52 microcontroller has been developed. EMG signals are amplified by an instrumentation amplifier and band-pass filtered before being digitized by an A/D converter. A serial link to a PC allows (in an off-line mode) the setting of different parameter s such as sampling rate and feature to be extracted. The mean absolute value (MAV) of the EMG computed over windows consisting of 5 samples was used as a feature. Only the first 160 ms of the EMG was used because during this period obtained patterns show good separability. A new motion was detected when the sum of MAVs from both channels exceeds a preset threshold value 4 healthy subjects participated in these experiments, each of the 6 reference patterns being computed by averagixig 50 measurements (in total 600 segments of the EMG signal lasting 160 ms each were used). With an Euclidean minimum distance classification scheme and short-time training, a 95.3% success rate for 3 DOF was obtained. The computations were all done in real time by the above described hardware.
Permalink
https://hdl.handle.net/10161/4871
Citation
From "MEC 95," Proceedings of the 1995 MyoElectric Controls/Powered Prosthetics Symposium Fredericton, New Brunswick, Canada: August, 1995. Copyright University of New Brunswick.
Collections
More Info
Show full item record