Re-Envisioning Reality For Rehabilitation: (A Past, Present & Future Look At Virtual Reality) 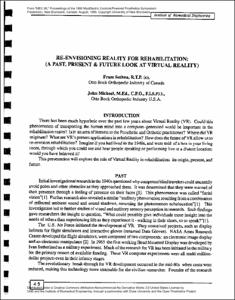 View / Download
541.3 Kb
Date
Authors
Sethna, Fram
Michael, John
Repository Usage Stats
201
views
235
downloads
Abstract
There has been much hyperbole over the past few years about Virtual Reality (VR). Could this phenomenon of transporting the human mind into a computer-generated world be important in the rehabilitation realm? Is it an area of interest to the Prosthetic and Orthotic practitioner? Where did VR originate? What are VR's present applications in rehabilitaiion? How does the haute of VR allow us to re-envision rehabilitation? Imagine if you had lived in the 1940s, and were told of a box in your living room, through which you could see and hear people speaking or performing live at a distant location; would you have believed it? This presentation will explore the role of Virtual Reality in rehabilitation: its origin, present, and future.
Permalink
https://hdl.handle.net/10161/4874
Citation
From "MEC 95," Proceedings of the 1995 MyoElectric Controls/Powered Prosthetics Symposium Fredericton, New Brunswick, Canada: August, 1995. Copyright University of New Brunswick.
Collections
More Info
Show full item record