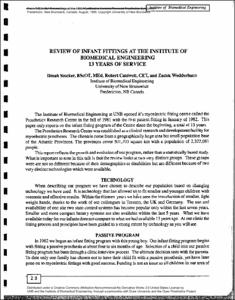 View / Download
608.7 Kb
Date
Authors
Stocker, Dinah
Caldwell, Robert
Wedderburn, Zadok
Repository Usage Stats
327
views
293
downloads
Abstract
The Institute of Biomedical Engineering at UNB opened it's myoelectric fitting centre called the Prosthetics Research Centre in the fall of 1981 with the first patient fitting in January of 1982. This paper only reports on the infant fitting program of the Centre since the beginning, a total of 13 years. The Prosthetics Research Centre was established as a clinical research and development facility for myoelectric prostheses. The clientele come from a geographically lasge area but small population base of the Atlantic Provinces, The provinces cover 501,703 square km with a population of 2,322,081 people. This report reflects the growth and evolution of our program, rather than a statistically based study. What is important to note in this talk is that the review looks at two very distinct groups. These groups were are not so different because of their demographics or disabilities but are different because of two very distinct technologies which were available.
Permalink
https://hdl.handle.net/10161/4875
Citation
From "MEC 95," Proceedings of the 1995 MyoElectric Controls/Powered Prosthetics Symposium Fredericton, New Brunswick, Canada: August, 1995. Copyright University of New Brunswick.
Collections
More Info
Show full item record