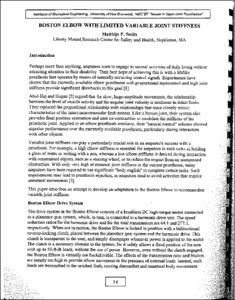 View / Download
190.4 Kb
Date
Author
Smitts, Matthijs P.
Repository Usage Stats
378
views
230
downloads
Abstract
Perhaps more than anything, amputees want to engage in normal activities of daily living without attracting attention to their disability. Their best hope of achieving this is with a lifelike prosthesis that operates by means of naturally occurring control signals. Experiments have shown that the currently available elbow prostheses with proportional myocontrol and high joint stiffness provide significant drawbacks to this goal. Abul-Haj and Hogan argued that for slow, large-amplitude movements, the relationship between the level of muscle activity and the angular joint velocity is nonlinear in intact limbs. They replaced the proportional relationship with relationships that more closely mimic characteristics of the intact neuromuscular limb system Like a human joint, their system also provides final position estimation and uses co-contraction to modulate the stiffness of the prosthetic joint. Applied to an elbow prosthesis emulator, their "natural control" scheme showed superior performance over the curriently available prostheses, particularly during interaction with other objects. Variable joint stiffness can play a particularly crucial role in an amputee's success with a prosthesis For example, a high elbow stiffness is essential for amputees in such tasks as holding a glass of water or writing with a pen, whereas a low elbow stiffness is desired during interaction with constrained objects, such as a steering wheel, or to reduce the impact fiom an unexpected obstruction. With only very high or minimal joint stiffness in the current prostheses, many amputees have been required to use significant "body english" to complete certain tasks. Such requirements may lead to prosthesis rejection, as amputees tend to avoid activities that require unnatural movements. This paper describes an attempt to develop an adaptation to the Boston Elbow to accommodate variable joint stiffness.
Permalink
https://hdl.handle.net/10161/4884
Citation
From "MEC 97," Proceedings of the 1997 MyoElectric Controls/Powered Prosthetics Symposium Fredericton, New Brunswick, Canada: August, 1997. Copyright University of New Brunswick.
Collections
More Info
Show full item record