Emg Amplitude Estimation: A Review Of The Past And A Look Towards The Future 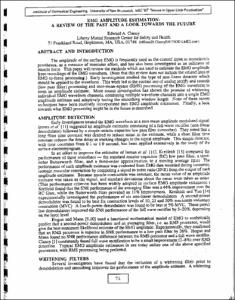 View / Download
426.0 Kb
Date
Author
Clancy, Edward A.
Repository Usage Stats
648
views
497
downloads
Abstract
The amplitude of the surface EMG is frequently used as the control input to myoelectric prostheses, as a measure of muscular effort, and has also been investigated as an indicator of muscle force. This paper will review the methods which are used to estimate the EMG amplitude from recordings of the EMG waveform. (Note that this review does not include the related area of EMG-to-force processing.) Early investigators studied the type of non-linear detector which should be applied to the waveform. This work led to the routine use of analog rectify and smooth (low pass filter) processing and root-mean-square (RMS) processing of the EMG waveform to form an amplitude estimate. More recent investigation has shown the prornise of whitening individual EMG waveform channels, combining multiple waveform channels into a single EMG amplitude estimate and adaptively tuning the smoothing window length. None of these recent techniques have been routinely incorporated into EMG amplitude estimators. Finally, a look towards what EMG processing might be in the future is described.
Permalink
https://hdl.handle.net/10161/4887
Citation
From "MEC 97," Proceedings of the 1997 MyoElectric Controls/Powered Prosthetics Symposium Fredericton, New Brunswick, Canada: August, 1997. Copyright University of New Brunswick.
Collections
More Info
Show full item record