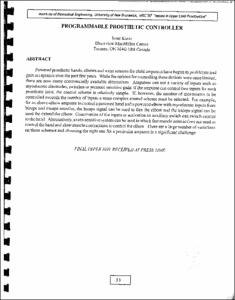 View / Download
48.2 Kb
Date
Author
Kurtz, Isaac
Repository Usage Stats
317
views
121
downloads
Abstract
Powered prosthetic hands, elbows and wrist rotators for child amputees have begun to proliferate and gain acceptance over the past few years. While the options for controlling these devices were once limited, there are now marry commercially available alternatives. Amputees can use a variety of inputs such as myoelectric electrodes, switches or pressure sensitive pads. If the amputee can control two inputs for each prosthetic joint, the control scheme is relatively simple. If however, the number of movements to be controlled exceeds the number of inputs a more complex control scheme must be selected. For example, for an above-elbow amputee to control a powered hand and a powered elbow with myoelectric inputs from biceps and triceps muscles, the biceps signal can be used to flex the elbow and the triceps signal can be used the extend the elbow. Coactivation of the inputs or activation an auxiliary switch can switch control to the hand. Alternatively, a rate-sensitive system can be used in which fast muscle contractions are used to control the hand and slow muscle contractions to control the elbow. There are a large number of variations on these schernes and choosing the right one for a particular amputee is a significant challenge. FINAL PAPER NOT RECEIVED AI PRESS TIME
Permalink
https://hdl.handle.net/10161/4895
Citation
From "MEC 97," Proceedings of the 1997 MyoElectric Controls/Powered Prosthetics Symposium Fredericton, New Brunswick, Canada: August, 1997. Copyright University of New Brunswick.
Collections
More Info
Show full item record