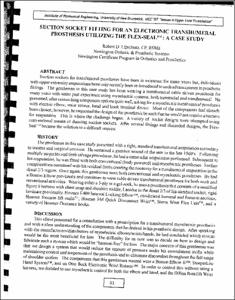 View / Download
337.2 Kb
Date
Author
Lipschutz, Robert D.
Repository Usage Stats
492
views
192
downloads
Abstract
Suction sockets for transfemoral prostheses have been in existence for many years but, individuals with upper extremity amputations have only recently been re-introduced to such advancements in prosthetic fittings. The gentleman in this case study has been wearing a transhumeral cable driven prosthesis for many years with some past experience using myoeleetric systems, both transradial and transhumeral. He presented, after researching component options quite well, asking fora myoelectric transhumeral prosthesis with electric elbow, wrist rotator, hand and hook terminal device. Most of the components had already been chosen, however, he requested the design of the prosthesis be such that he would not require a harness for suspension. This is where the challenge began. A variety of socket designs were attempted using conventional means of donning suction sockets. After several fittings and discarded designs, the Flex-Seal became the solution to a difficult request.
Permalink
https://hdl.handle.net/10161/4897
Citation
From "MEC 97," Proceedings of the 1997 MyoElectric Controls/Powered Prosthetics Symposium Fredericton, New Brunswick, Canada: August, 1997. Copyright University of New Brunswick.
Collections
More Info
Show full item record