Assessing The Satisfaction Of Young Users Of Myoelectric Prostheses 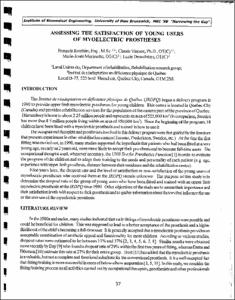 View / Download
550.7 Kb
Date
Authors
Routhier, François
Vincent, Claude
Morissette, Marie-Josée
Desaulniers, Lucie
Repository Usage Stats
369
views
198
downloads
Abstract
The Institut de réadaptation en deficience physique de Québec (IRDPQ) began a delivery program in 1990 to provide upper limb myoelectric prostheses for young children. This centre is located in Quebec City (Canada) and provides rehabilitation ser vices for the population of the eastern part of the province of Quebec. This territory is home to about 2.25 million people and represents an area of 525,000 km2 (in comparison, Sweden has more than 8.5 million people living within an ar ea of 450,000 km2). Since the beginning of the program, 18 children have been fitted with a rnyoelectric prosthesis and trained in how to use it. The occupational therapists and prosthesists involved in this delivery program were first guided by the literature that presents experiences in other rehabilitation centers (Toronto, Fredericton, Sweden,etc. ) At the time the first fitting was carried out, in 1990, many studies supported the hypothesis that patients who had been fitted at a very young age, as early as 2 years old, were more likely to accept their prosthesis and to become fiill-time users. The occupational therapist used, whenever necessary, the UNB Test for Prosthetics Function in order to evaluate the progress of the children and to adapt their training to the needs and per sonality of each patient (e.g. age, experience with upper limb prosthesis, distance between their residence and the rehabilitation centre). Nine years later, the dropout rate and the level of satisfaction or non-satisfaction of the young users of myoelectric prostheses who received them at the IRDPQ remain unknown Ihe purpose of this study is to determine the dropout rate of the group of young users who have been fitted and trained with an upper limb myoelectric prosthesis at the IRDPQ since 1990. Other objectives of the study are to assess their importance and their satisfaction levels with respect to their prosthesis and to gather information about factors that influence the use or the non-use of the myoelectric prosthesis.
Permalink
https://hdl.handle.net/10161/4907
Citation
From "MEC 99," Proceedings of the 1999 MyoElectric Controls/Powered Prosthetics Symposium Fredericton, New Brunswick, Canada: August, 1999. Copyright University of New Brunswick.
Collections
More Info
Show full item record