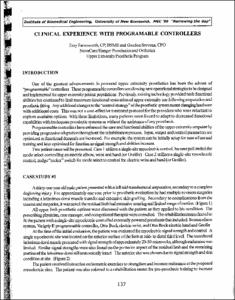 View / Download
509.9 Kb
Date
Author
Farnsworth, Troy
Repository Usage Stats
202
views
87
downloads
Abstract
One of the greatest advancements in powered uppet extremity posthetics has been the advent of "programmable" controllers. These programmable controllas are allowing new operational strategies to be designed and implemented for upper extremity patient populations. Previously, existing technology provided basic functional abilities but continued to limit maximum functional restoration of upper extremity use following amputation and prosthetic fitting. Any additional changes to the "control strategy" of the prosthetic system meant changing hardware with additional costs. This was not a cost-effective treatment protocol for the provider's who were reluctant to explore available options. With these limitations, many patients were forced to adapt to decreased functional capabilities with inadequate piosthetic systems or without the assistance of any prosthesis. Programmable controllets have enhanced the rate and functional abilities of the upper extremity amputee by providing progressive adaptation throughout the rehabilitation process. Input, output and control parameters are optimized as functional demands are increased. For example, the system can be initially setup for ease of use and training and later optimized for function as signal strength and abilities increase. Two patient cases will be presented Case 1 utilizes a single-site myoelectric control, harness pull switch for mode select controlling an electric elbow, wrist and hand (or Greifer). Case 2 utilizes a single-site myoelectric control, nudge "rocker" switch for mode select to control the electric wrist and hand (or Greifer).
Permalink
https://hdl.handle.net/10161/4909
Citation
From "MEC 99," Proceedings of the 1999 MyoElectric Controls/Powered Prosthetics Symposium Fredericton, New Brunswick, Canada: August, 1999. Copyright University of New Brunswick.
Collections
More Info
Show full item record