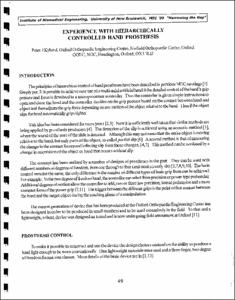 View / Download
369.5 Kb
Date
Author
Kyberd, Peter J.
Repository Usage Stats
521
views
213
downloads
Abstract
The principles of hierarchical control ofhand prostheses have been described in previous MEC meetings. Simply put: It is possible to achieve easy use of a multi-axial artificial hand if the detailed control of the hand's grip posture and force is devolved to a microprocessor controller. Thus the controller is given simple instructions to open and close the hand and the controller decides on the grip posture based on the contact between hand and object and then adjusts the grip force depending on any motion of the object relative to the hand. Thus if the object slips the hand automatically grips tighter. This idea has been considered for many years. Now it is sufficiently well taken that similar methods are being applied by prosthesis producers. The detection of the slip is achieved using an acoustic method, where the sound of the start of the slide is detected. Although this may not mean that the entire object is moving relative to the hand, but only parts of the object, so called partial slip. A second method is that of measuring the change in the contact forces and inferring slip from those changes. This method can be confused by a change in orientation of the object or hand that occurs without slip. The concept has beenr ealised by a number of designs of prostheses in the past. They can be used with different numbers of degrees of fieedom, from one through to four (and most recently six). The basic control remains the same, the only difference is the number of different types of basic grip form can be achieved. For example: In the two degree of freedom hand, the controller can select from precision or power type prehension. Additional degrees of motion allow the controller to add, two or three jaw precision, lateral prehension and a more compact form of the power grip. The trigger between the different grips is the point of first contact between the hand and the target object during the reaching phase of a manipulation. The current generation of device that has been produced at the Oxford Orthopaedic Engineering Centre has been designed in order to be produced in small numbers and to be used extensively in the field. To that end a lightweight, robust, device was designed an tested and is now under going field assessment at Oxford.
Permalink
https://hdl.handle.net/10161/4911
Citation
From "MEC 99," Proceedings of the 1999 MyoElectric Controls/Powered Prosthetics Symposium Fredericton, New Brunswick, Canada: August, 1999. Copyright University of New Brunswick.
Collections
More Info
Show full item record