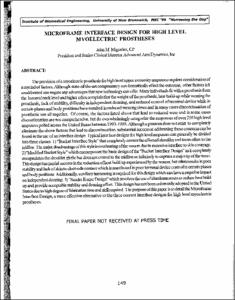 View / Download
79.9 Kb
Date
Author
Miguelez, John M.
Repository Usage Stats
275
views
88
downloads
Abstract
The provision of a myoelectric prosthesis for high level upper extremity amputees requires consideration of a myriad of factors. Although state-of-the-art componentty can dramatically effect the outcome, other factors left unaddressed can negate any advantages that new technology canoffer. Many individrials fit with a prosthesis fiom the humeral neck level and higher often complain that the weight of the prosthesis, heat build-up while wearing the prosthesis, lack of stability, difficulty in independent donning, and reduced control of terminal device while in certain planes and body positions have resulted in reduced wearing times and in many cases discontinuation of prosthetic use all together. Of course, the factors listed above that lead to reduced wear and in some cases discontinuation are not comprehensive, but do overwhelmingly categorize the responses of over 250 high level amputees polled across the United States between 1993-1999. Although a panacea does not exist to completely eliminate the above factors that lead to discontinuation, substantial success at addressing these concerns can be found in the use of an interface design. Typical interface designs for high level amputees can generally be divided into three classes: 1) "Bucket Interface Style" that completely cover s the effected shoulder and torso often to the midline. The major disadvantage of this style is overheating of the wearer due to excessive interface to skin coverage. 2)"Modified Bucket Style" which encompasses the basicdesign of the "Bucket Interface Design" as it completely encapsulates the shoulder girdle but does not extend to the midline or inferiorly to capture a majority of the torso. This design has partial success in the reduction of heat build up experienced by the wearer, but often results in poor stability and lack of skin to electrode contact whichis manifested in poor terminal device control in certain planes and body positions. Additionally, auxiliary harnessing is required for this design which can have a negative impact on independent donning. 3)"Sander Frame Design" which involves the use of aluminum struts to reduce heat build up and provide acceptable stability and dorming effort. This design has not been universally adopted in the United States due to high degree of fabrication time and skill required. The purpose ofthis paper is to detail the Microframe Interface Design, a more effective alternative to the three current interface designs for high level myoelectric prostheses. FINAL PAPER NOT RECEIVED AT PRESS TIME
Permalink
https://hdl.handle.net/10161/4918
Citation
From "MEC 99," Proceedings of the 1999 MyoElectric Controls/Powered Prosthetics Symposium Fredericton, New Brunswick, Canada: August, 1999. Copyright University of New Brunswick.
Collections
More Info
Show full item record